Henning Stapelbroek has been at the head of a large farm in Saxony-Anhalt for two and a half years. In this challenging location, he has converted the whole farm over to no-till. His most important machine for this task: a Novag 650 T-Force-Plus.

Being open for challenges and unusual concepts – this is what differentiates Henning Stapelbroek. Both characteristics are well needed in his job. The 29-year-old has been in charge of 1,300-hectares of arable farming at the agricultural cooperative in Tangermünde/Buch in Saxony-Anhalt since 2020.

But unlike in the nearby Magdeburger Börde, the site conditions around Tangermünde near the Elbe are anything but optimal for successful crop cultivation. Water is a scarce commodity in the region, with an average of just under 500 millimetres of precipitation per year. In addition, the soils are extremely heterogeneous, ranging from light sandy soils to heavy clay. 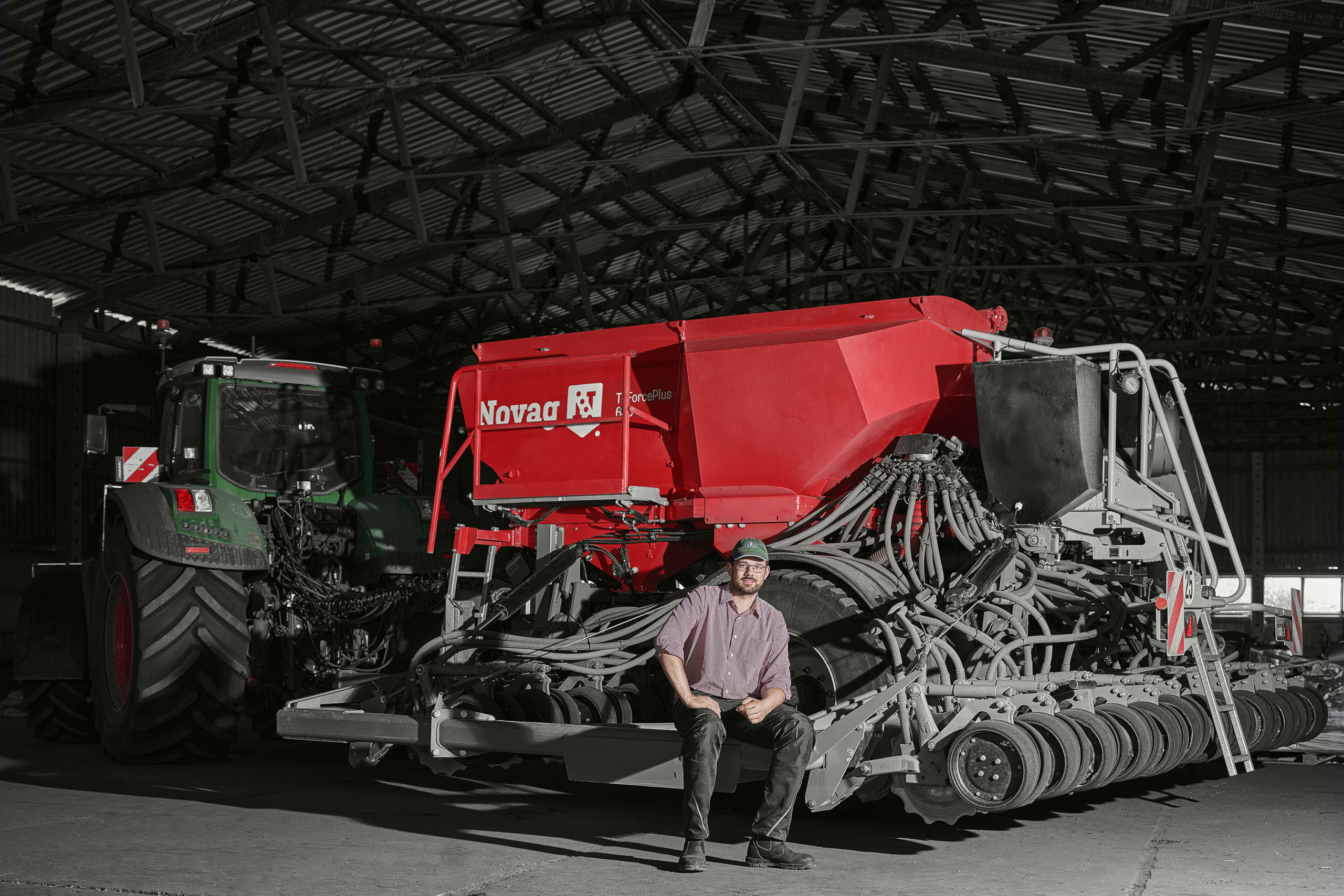 "If you want to farm economically here, you can only really do it with no-till," Stapelbroek says. 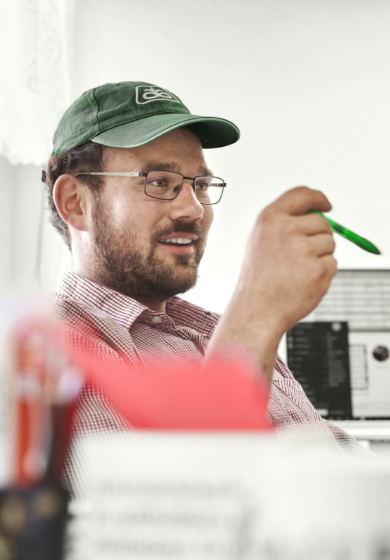 No-till as the only alternative

“If you want to farm economically here, you can only really do it with no-till,” Stapelbroek says. His approach: the cultivation costs for cereals must not be higher than the income he achieves with yields of two tonnes per hectare. That is the minimum yield he achieves even in very dry years.

It was, therefore, clear when he took up his post, that the entire arable land was to be cultivated only by direct seeding. Stapelbroek brought with him the necessary experience for this. On his farm during training and in his previous employment, he had already worked a lot with no-till farming methods.

Stapelbroek’s most important machine is a Novag 650 T-Force-Plus with a working width of six metres and 24 coulters with 25 centimetres row spacing. The farmer particularly appreciates the robustness of the machine, which is needed on the heavy soils directly on the Elbe in order to safely maintain the sowing depth.

“With the introduction of no-till, we have completely turned crop production around,” Stapelbroek explains. The crop rotation, for example, has been significantly expanded. In addition to various cereals, he now grows grain maize, oilseed rape, sunflowers, field beans and peas. Intercrops are the rule for almost all crops and fertilisation has also been adapted. There is no longer a plough furrow. 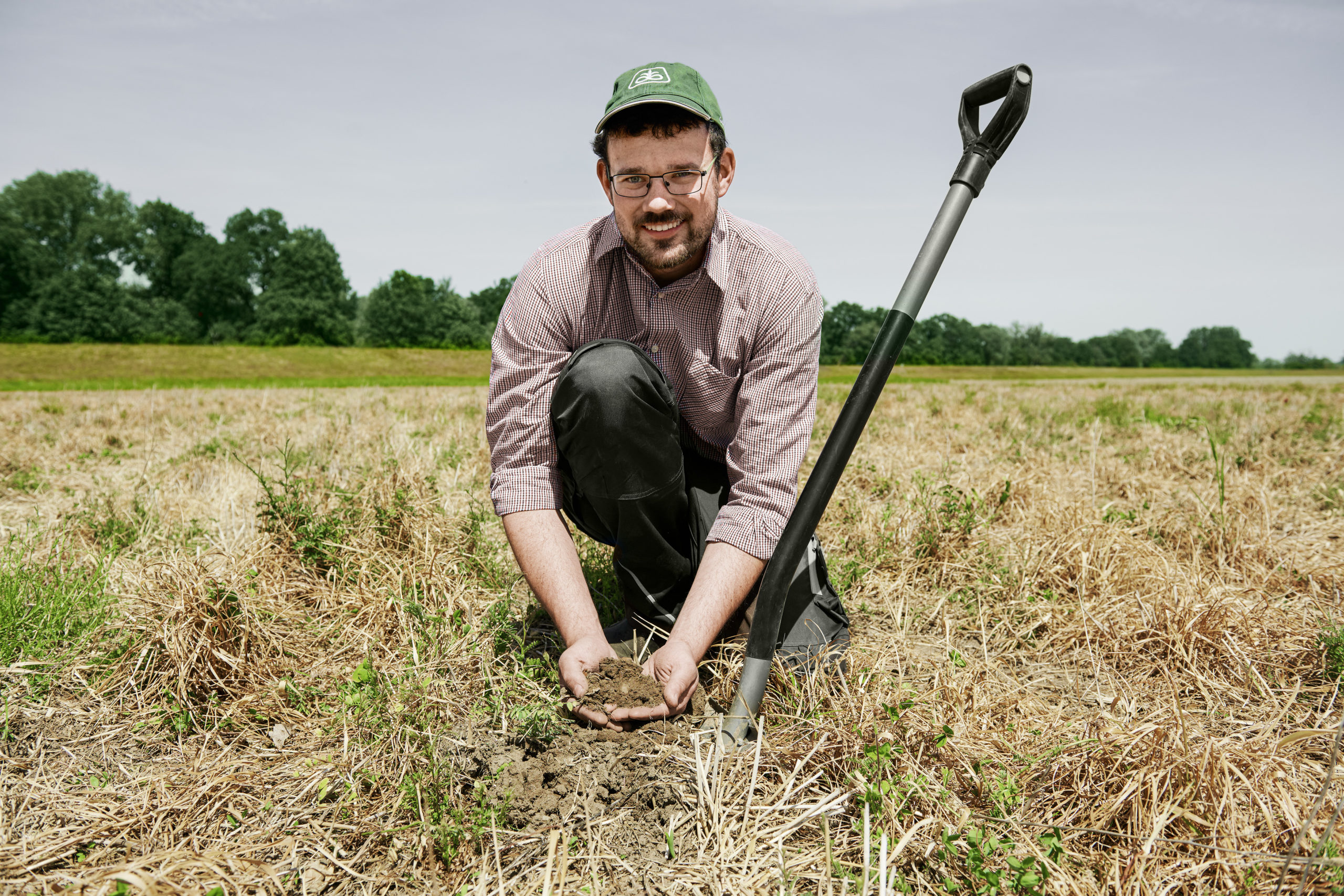 One machine for all crops

Novag is used for no-till drilling of all crops, whether winter rape, maize or field beans. So far, the machine has convinced him on many levels. “It starts with the fact that there is no hairpinning, even with large amounts of straw,” says Stapelbroek. “The seeds always have good soil contact and do not get stuck in the coarse organic material.”

It is particularly important for him that the machine copes well with the extremely varied, sometimes very hard soils. In his experience, this is where the IntelliForcePlus electronic coulter pressure adjustment, which continuously optimises the pressure depending on the soil resistance, proves its worth.

Stapelbroek can follow this function via the Novag display in the tractor cab. “It’s crazy how the pressure jumps back and forth on our sites,” he reports. “It often ranges from 80 bar to a maximum pressure of 200 bar, even on small sites. Without automatic coulter pressure adjustment, the sowing depth would definitely not be so uniform.” 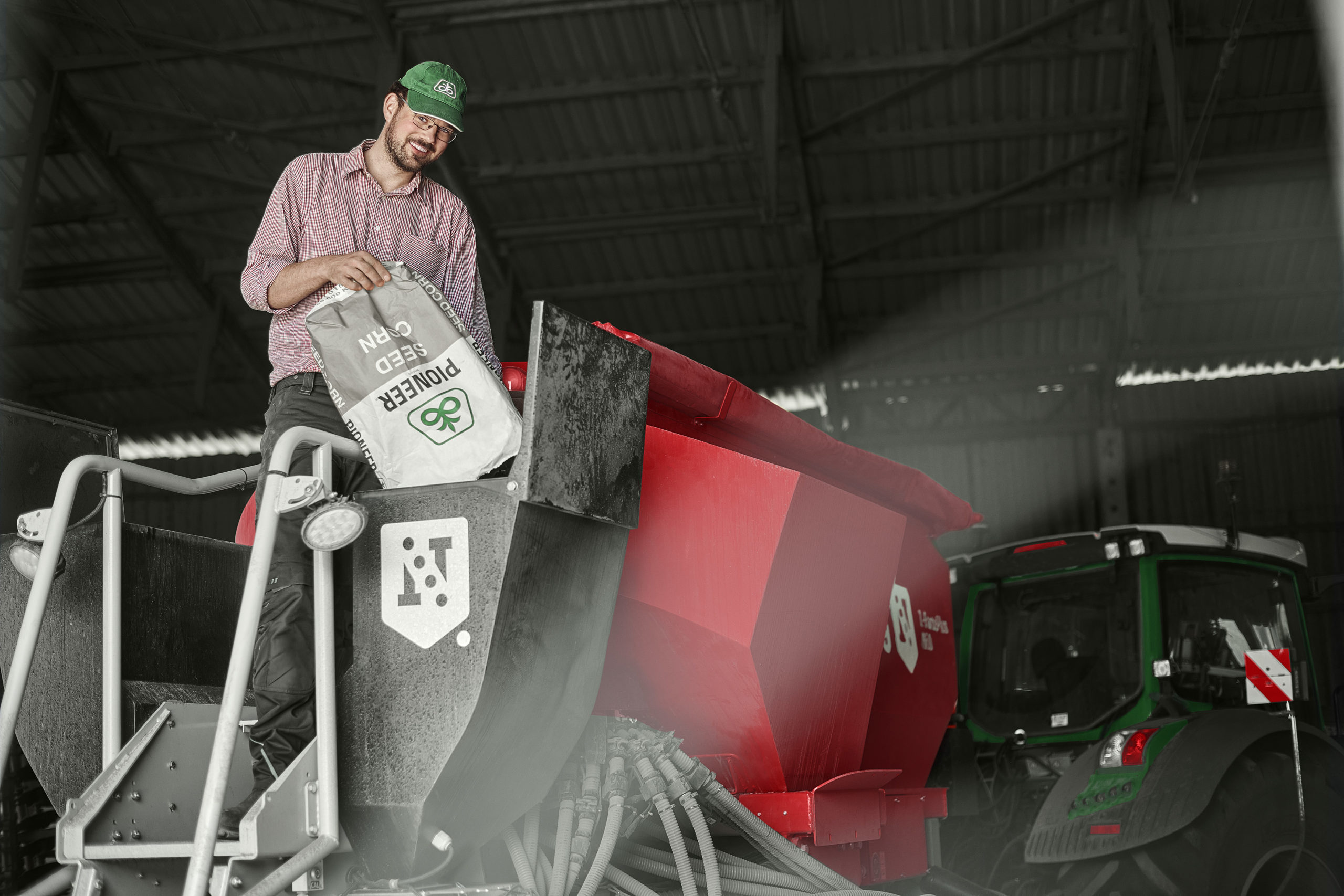 Maize seeding is the supreme discipline

According to Stapelbroek the machine plays out its advantages especially in maize sowing – the supreme discipline of no-till. This is because maize needs a well loosened, warm soil, especially in the start-up phase; and the Novag technology creates optimal conditions for this, whether on moist or dry soils.

To start with, he still used a single grain drill for sowing maize, until he had a kind of key experience last year. With the onset of rain, he had to stop sowing with the single grain drill on heavy soil. He sowed the rest of the area with the Novag machine. “Even though we didn’t separate the grains, the plants in these areas were much more vigorous later on and the maize stood much better than on the conventionally tilled areas.”

Stapelbroek attributes this to the fact that the discs of the single grain drill strongly compact the soil area around the seed, especially in moist, heavy soils. This delays warming and makes rooting more difficult. In contrast, when depositing with the Novag T-slot coulter, there is virtually no compaction in this sensitive area. 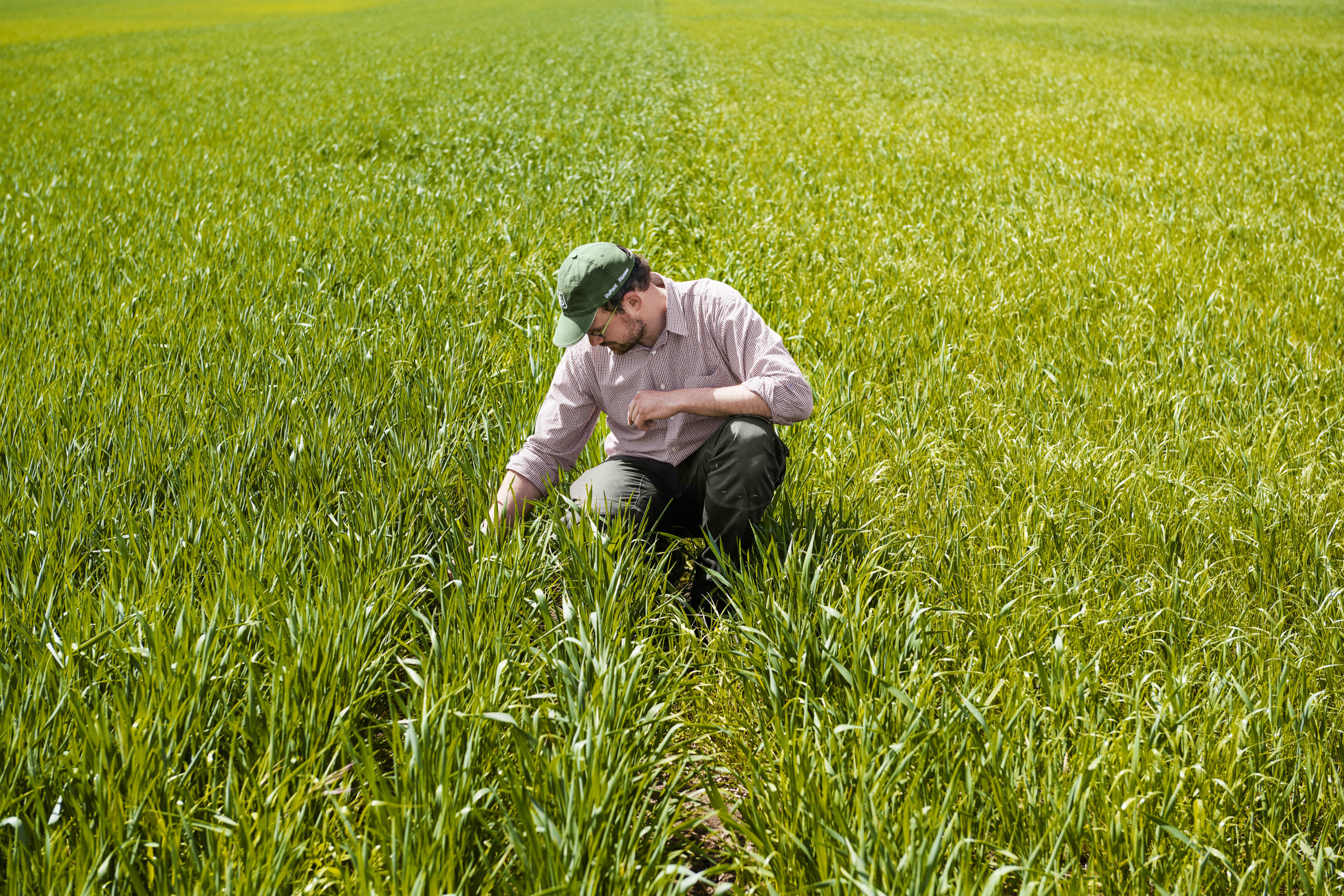 Separating with the Novag maize kit

Based on his good experience, during the year he sowed the entire 80 hectares of grain maize on heavy soils with the Novag. For this purpose, he added the Novag maize kit to the machine, with which the grains can be separated before placement. Even if the placement quality does not quite reach the level of a single grain drill, Henning Stapelbroek is satisfied with the result.

In the current season, however, he has had to struggle with completely different conditions. The soil was very dry and hard at the time of sowing. “I wouldn’t even have been able to get into the soil with the single grain drill” Stapelbroek says. The Novag also reached its limits with the placement depth of five centimetres. “But we managed to get a clean placement. And where the Novag can’t get in, no direct seed drill can get in,” Stapelbroek says.

Another point that the farmer appreciates about the Novag is its variability. “The machine simply offers an incredible number of possibilities,” Stapelbroek says. “If you want to use them, it’s brilliant.” And he wants to use these possibilities. Depending on the crop, he is always experimenting with different undersown crops or intercrop mixtures. This is made possible by a variable system with exchangeable seed tanks and individually adjustable sowing coulters, with which each crop can be placed at the optimal sowing depth. 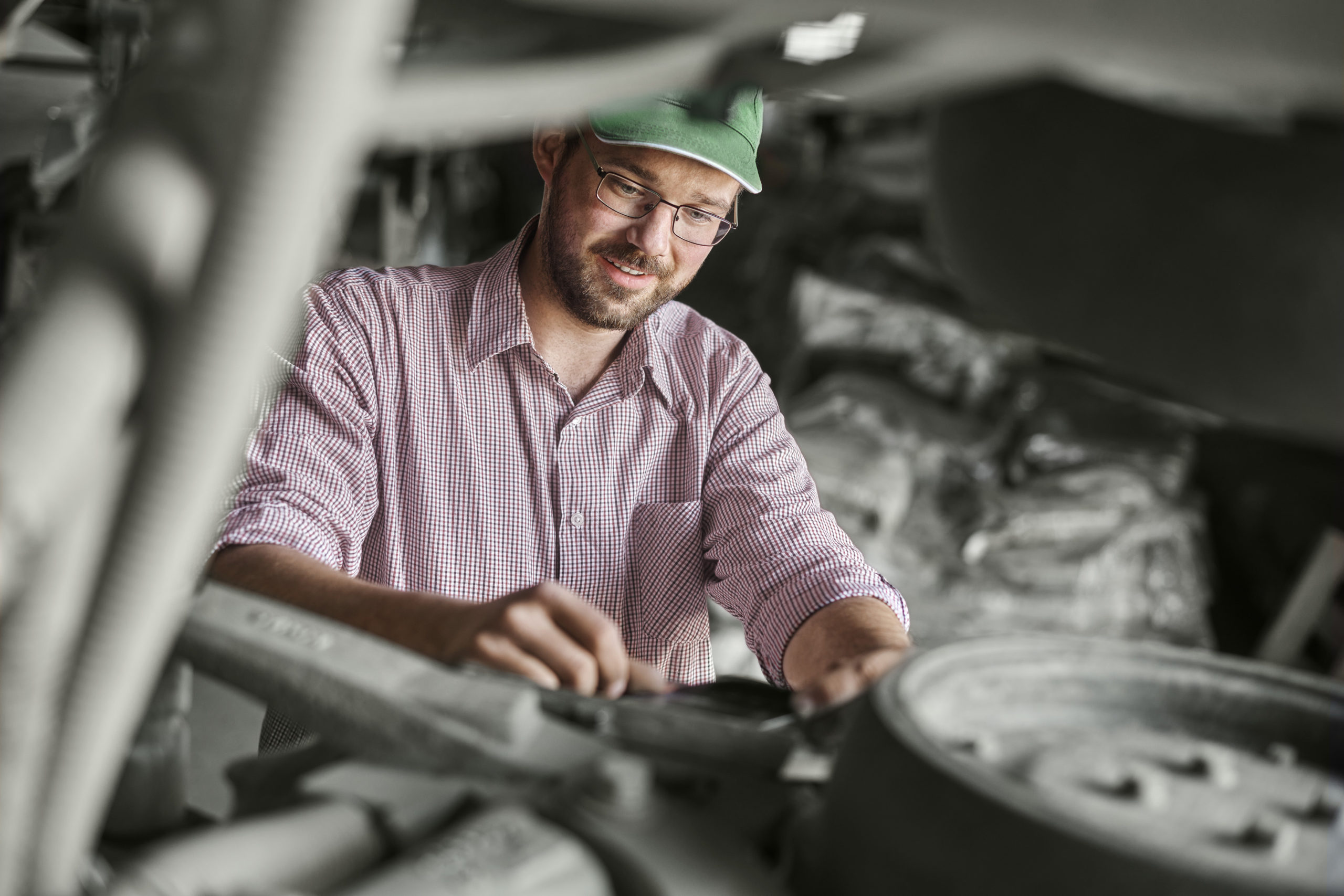 He makes full use of these diverse adjustment options, especially when sowing oilseed rape. In addition to the fine rape seeds, he applies an intercrop mixture as a companion seed, underground fertilisation, and slug pellets, either on the surface or in the soil, in a single operation. “And everything ends up exactly where it belongs,” Stapelbroek says happily. “That’s no mean feat – using four tanks with four different components at the same time.”

With winter cereals, too, he has already achieved initial successes with his no-till concept and the Novag. After two years of cultivation, he has already observed a clear reduction in the presence of brome, the farm’s problematic weed in cereals. Stapelbroek attributes this to the no-till system. Since Novag only makes a slot in the soil and hardly moves it during sowing, no new brome seeds reach the top. As most of the seeds in the upper soil layers have meanwhile emerged, the presence of brome is on the decrease. 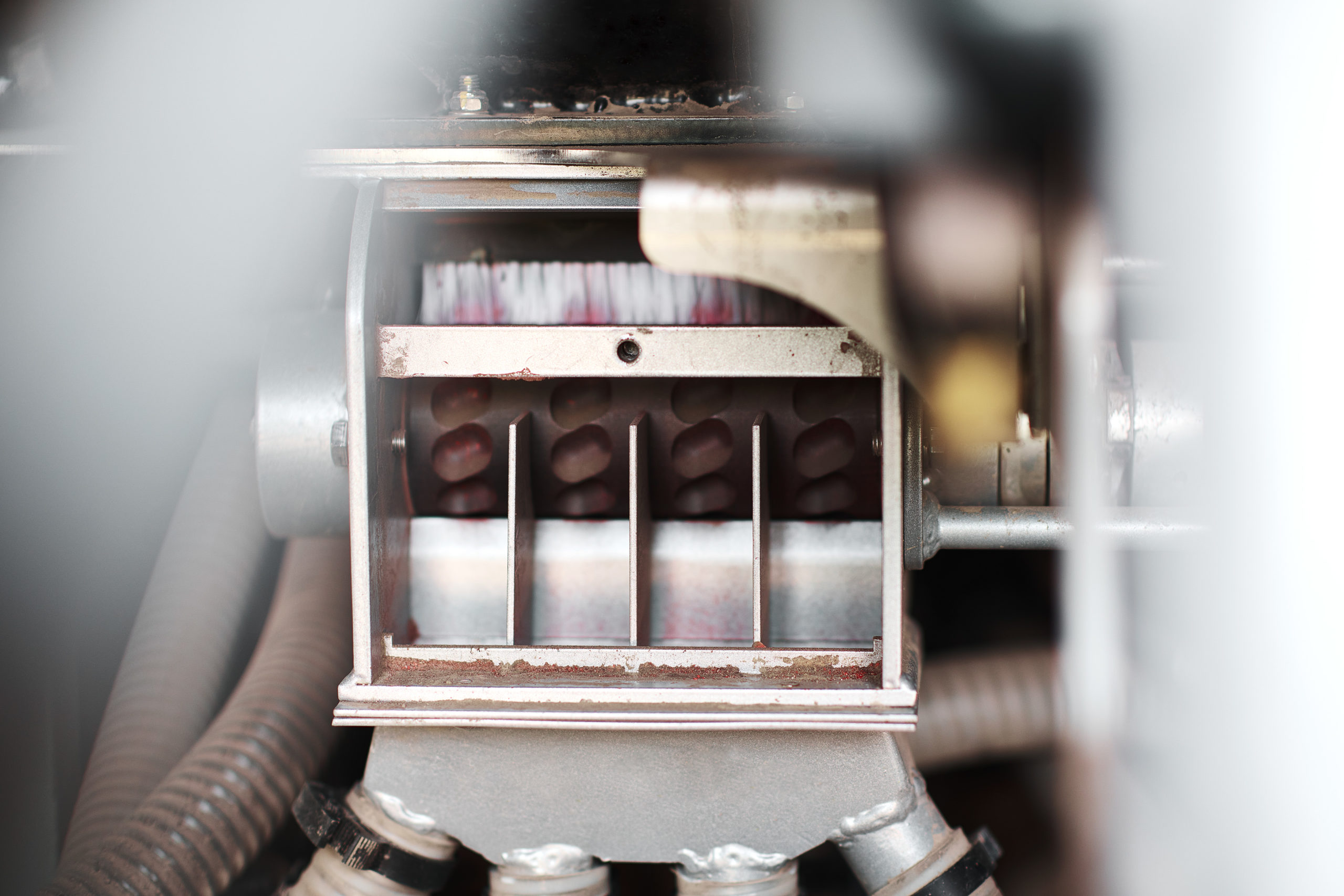 No more sandstorms in the village

The neighbours in the village have also noticed another effect of no-till. In the first year of cultivation with the Novag, they wondered why no more sandstorms were passing through the village in summer. Such sandstorms had been common until then because the large, conventionally tilled areas, which were open for a long time, were susceptible to wind erosion.

Henning Stapelbroek is not surprised: “With no-till, the soil is much better protected, either by an intercrop or a mulch overlay.” In addition, there are the crop production advantages of the method. “With no-till, we definitely have more water in the soil. The mulch just massively lowers evaporation,” Stapelbroek says. That is why, according to his observations, the crops last several days longer than conventionally sown crops during persistent drought. 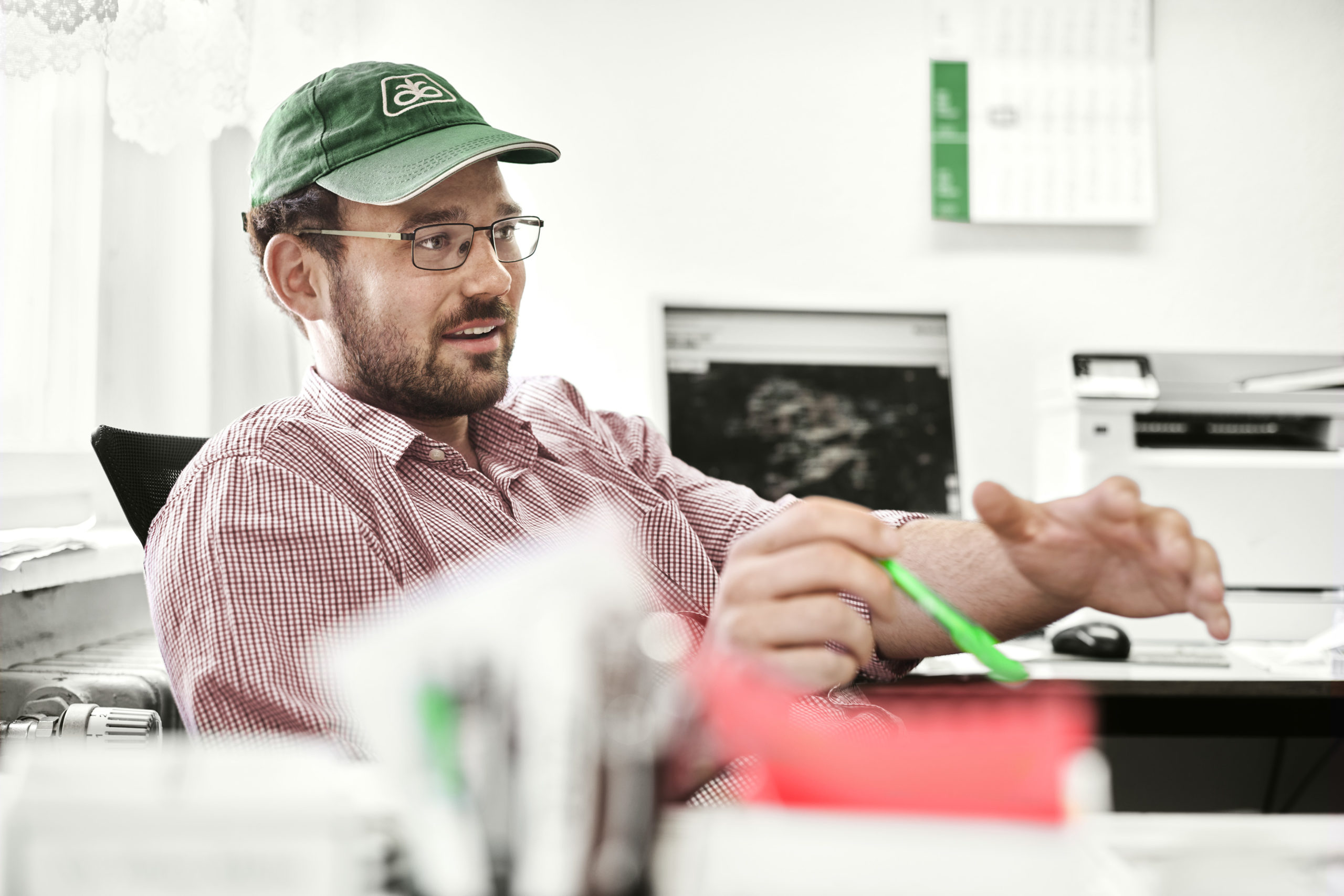 The soil structure is also showing initial changes after just two years of cultivation. Stapelbroek: “We have many more earthworms on our land than before the introduction of no-till.” He also observes that the soil is developing an increasingly better fermentation due to the excretions of the microorganisms in the upper topsoil. “You can start working the land much earlier now, the soil is more robust and doesn’t stick,” Stapelbroek says.

Word of the many positive developments has now spread to neighbouring farms, and interest in no-till is high. Stapelbroek receives more and more enquiries for the Novag. This year alone, he has already cultivated more than 200 hectares under contract. He sees this as a confirmation of his concept: “In my opinion, there is no way around no-till in dry regions like ours. It is the only sensible, sustainable way here.” 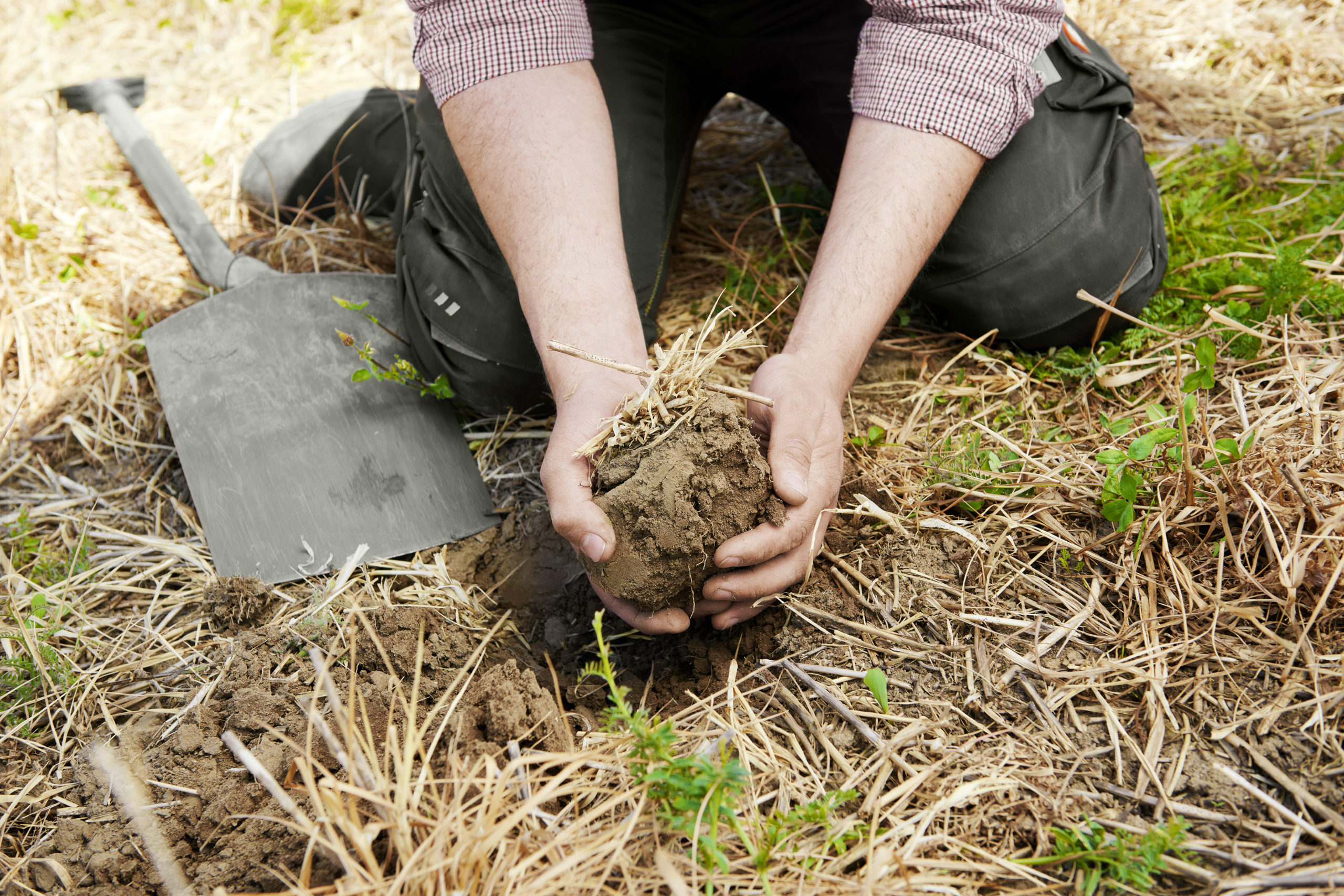 Cost-covering, even in dry years

He explicitly includes the economic efficiency of the Novag. At driving speeds of eight to ten kilometres per hour, it achieves an area output of up to four hectares per hour. In addition, the costs and labour required for ploughing and cultivating to prepare the seedbed are eliminated. “With the plough, it would not be possible to cover costs in very dry years,” Stapelbroek says.

So far, he has already achieved the same yields with no-till as with earlier conventional tillage – but with significantly less effort. However, he assumes that even higher yields can be achieved with increasing humus content and increasingly better soil fertility.

To this end, the farmer, who is keen to experiment, is already nurturing further ideas on how crop rotation, intercrops, undersown crops and underground fertilisation can be combined even better. “With the Novag, I have exactly the right machine for experimenting,” Stapelbroek says and laughs. 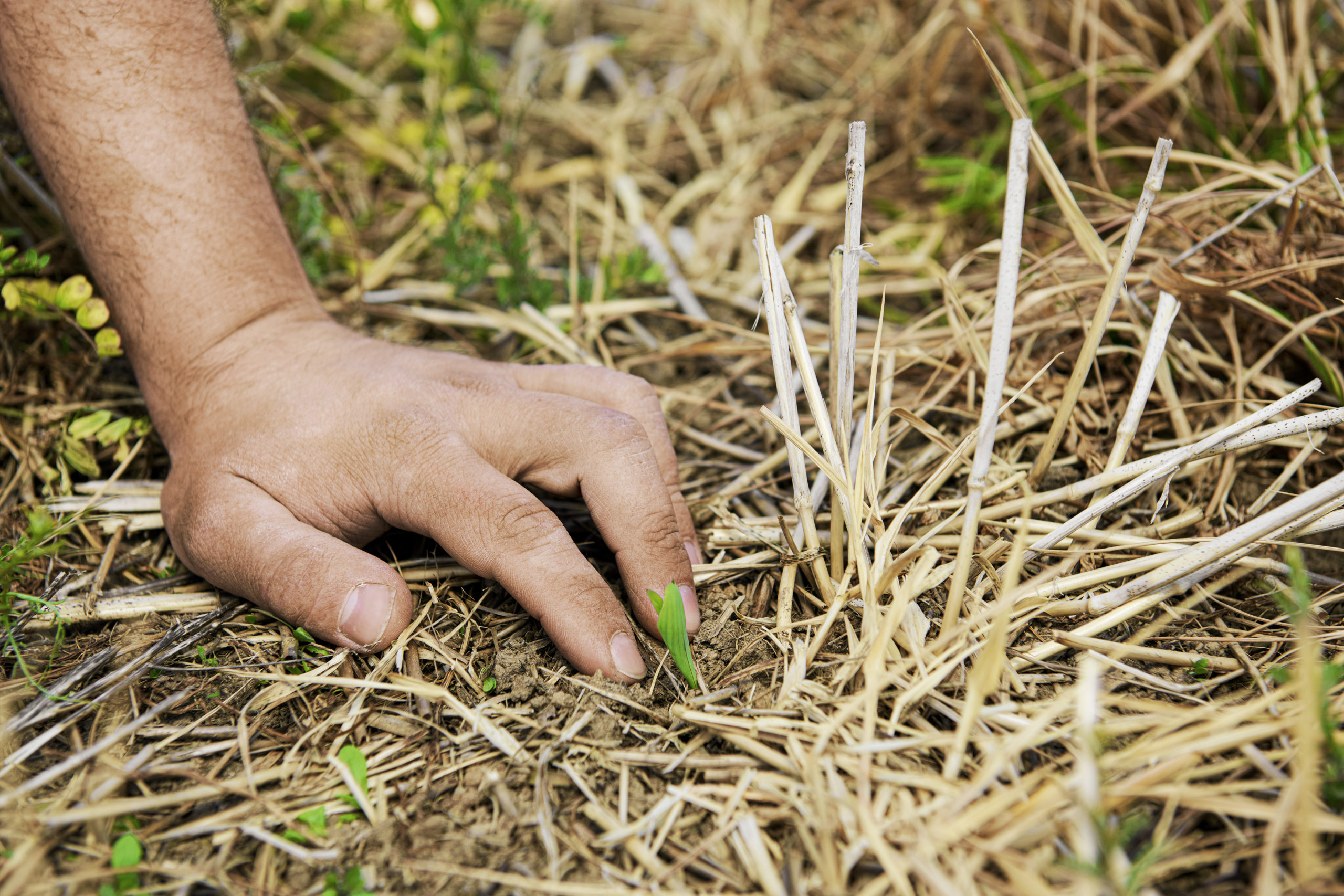